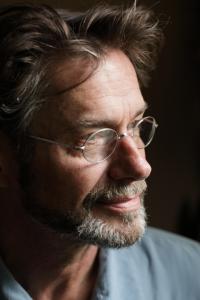 “Once, a young boy was brought to my studio by his parents to pick out his own present for his first birthday.  Passing by the paintings deemed most appropriate by his father and mother, he chose instead a painting he called “Ba”.  At first they tried to persuade him otherwise, carrying him around, introducing him to different work.  And though he was obviously interested in all that lay before him, he continually twisted and turned from his parent’s arms back to the painting of his choice, speaking his one-syllable language – reaching out to “Ba”.  Eventually his parents, being good parents, did the sensible thing and conceded to his emphatic display of certainty.

“The boy got his painting, and I was left amazed, once again, at the power of particular inanimate objects to bring life to life.

“That was my gift from Isaac.”