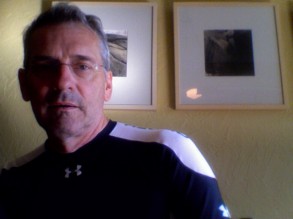 ” I began my Art education at Augustana College in Sioux Falls, SD, in 1971, studying drawing with Ogden Dalrymple. In 1973, I transferred to MSU – Moorhead to study drawing and painting with Sharon Mendola, graduating in 1976. While attending MSU I began working in the medium of film and video and continued by completing a Master’s degree in Film Theory at the University of Iowa, in 1979.”